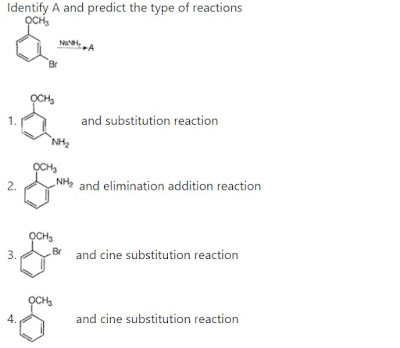 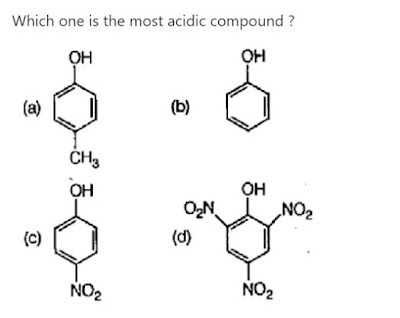 Reaction of phenol with chloroform in the presence of dilute sodium hydroxide finally introduces, which one of the following functional group? NEET 2015 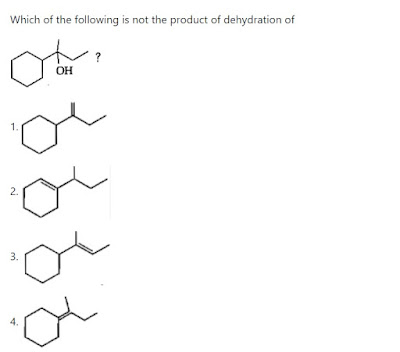 Which of the following will not be soluble in sodium hydrogen carbonate? [AIPMT 2014]

Among the following sets of reactants which one produces anisole? [AIPMT 2014] 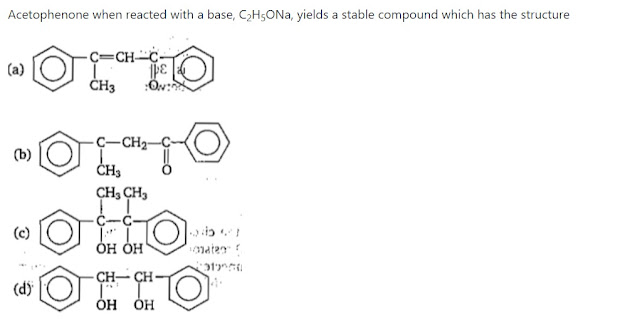 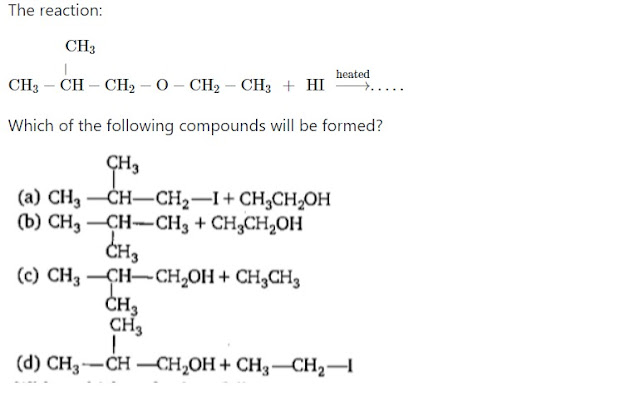 Which one of the following can be oxidised to the corresponding carbonyl compound: [CBSE AIPMT 2004]

Which of the following will not form a yellow precipitate on heating with an alkaline solution of iodine: [CBSE AIPMT 2004]

(C) by treating with conc. H2SO4 at room temperature

(A) isopropyl iodide and methyl iodide

(B) isopropyl alcohol and methyl iodide

Which among the following phenolic compounds is most acidic in nature? [MHT CET 2016]

Reaction of which among the following ethers with HI in cold leads to formation of methyl alcohol ? [MH-CET 2015]

During dehydration of alcohols to alkenes by heating with conc. H2SO4 the initiation step is [AIEEE 2003]

(A) formation of carbocation

(B) elimination of water

(C) formation of an ester

Name the catalyst used in commercial method of preparation of phenol. [MHT CET 2016]

Arrange the following compounds in the increasing order of their acidic strength: [KARNATAKA CET 2015]

Iodoform can be prepared from all except: [AIEEE 2012]

Which of the following compounds has highest boiling point? [MH-CET 2015]

The most suitable reagent for the conversion of

A liquid was mixed with ethanol and a drop of concentrated H2SO4was added. A compound with a fruity smell was formed. The liquid was [AIEEE 2009]

c) both NaOH and HCI

Which of the following has the maximum viscosity .. [ AFMC 2003]

The only alcohol that can be prepared by the indirect hydration of alkene is .. [ AFMC 2005]

Q3) Which of the following represents Lucas reagent? [ AFMC2006] 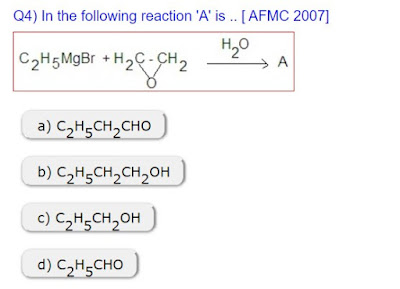 Which of the following is added to chloroform to slow down its aerial oxidation in presence of light?  [ AFMC 2008]

Chlorobenzene can be prepared by reacting aniline with [ IIT 1984]

The reaction of toluene with chlorine in presence of ferric chloride gives predominantly ..[ IIT 1986]

Which of the following is most acidic?

A)mixture of secondary and tertiary alcohols

B)mixture of primary and secondary alcohols

Among the following, which is least acidic?

An ether is more volatile than an alcohol having the same molecular formula. This is due to

An organic compound A containing C, H and O has a pleasant odour with boiling point of 78°C. On boiling A with concentrated H2SO4, a colourless gas is produced gas is produced which decolourises bromine water and alkaline KMnO4. The organic liquid A is

An organic compound A(C4H9Cl) on reaction with Na/diethyl ether gives a hydrocarbon which on monochlorination gives only one chloro derivative then, A is:

Anisole can be prepared by the action of methyl iodide on sodium phenate. The reaction is called

Catalytic dehydrogenation of a primary alcohol gives a

Chloro ethane reacts with X to form diethyl ether. What is X

Consider the following reaction
C2H5OH + H2SO4  → Product
Among the following, which one cannot be formed as a product under any conditions?

Ethyl chloride is converted into diethyl ether by

Formation of diethyl ether from ethanol is based on a

From amongst the following alcohols the one that would react fastest with conc. HCl and anhydrous ZnCl2, is

In preparation of alkene from alcohol using Al2O3which is effective factor:

D.None of the above

B.it is not good dehydrating agent

Methyl phenyl ether can be obtained by reacting

Question and Answer on “MCQ on Alcohols, Phenols and Ethers”

2. Phenol reacts with bromine in CS2 at low temperature to give

3. When phenol is treated with excess bromine water it gives

4. Phenol on reduction with H2 in the presence of Ni catalyst gives

5. Dehydration of alcohol is an example of

6. The compound obtained by the reaction of ethene with diborane followed by hydrolysis with alkaline H2O2 is

7. Which of the following is formed when phenol is exposed to air?

8. Which of the following is formed when glycerol is heated with oxalic acid at 503K?

9. The alcohol which does not react with Lucas reagent is

10. Phenol is less acidic than